Joan enjoys relative peace in her relationship with Ellis. However, she establishes a strong connection with a stranger whom she meets when they duck into the same doorway during a rainstorm. She is later surprised to find that the man is Ellis's agent, Brock. Brock meets with Joan outside a play when Ellis is called away to a meeting. They begin kissing, and end up back at Brock's place, where they declare their love for each other. Brock feels it is wrong to sleep together while she is still Ellis's girlfriend, so Joan promises to break things off. However, Ellis surprises her by finally telling her that he loves her. Sivad pressures Lynn to move out of William's house. He initially doesn't want to live with Lynn, but soon changes his mind. Toni grows annoyed with all of Todd's habits. After he reveals that he is deep in debt, she leaves him and shows up at Joan's house. William continually tries to get Maya to actually do her job, but she spends all of her time reading se 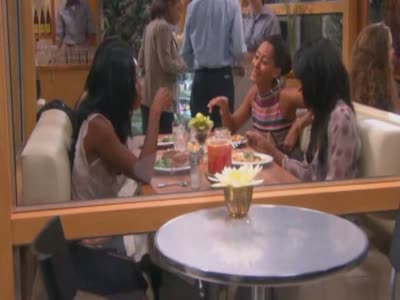