The Bill of Wrongs

All is crazy after Busmalis and Alvarez flee from Oz via one of Busmalis' tunnels. Hernandez discloses details about the shooting to Glynn and mentions Tarrant getting the gun from Adebisi, who got the gun originally from Clayton Hughes. Glynn confronts Hughes, Hughes confesses immediately and is quickly arrested. New inmate Morales is offered Hernandez's end of the "tit" trade only if he kills Hernandez. Morales asks Rebadow to do the deed in exchange for anything Rebadow wants and Rebadow accepts. Escapee Busmalis is caught and returned to Oz where he is rebuked by Rebadow. A "fresh from the hole" Adebisi begins implementing his plan to get a new Em City administrator. A cell phone appears and Ryan schemes to get his hands on it. Like most O'Reily schemes, someone ends up dead and this case is no different as Hoyt's recruited to do the "honors". Said scores a victory for Jason Cramer and Shirley Bellinger gets a visitor. 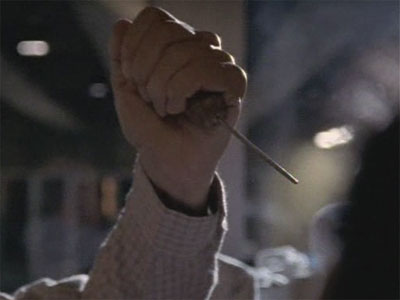