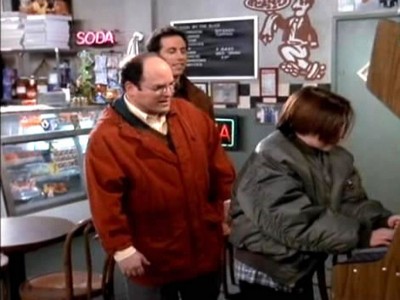 Elaine is confronted with cake from two separate birthday celebrations. She is tired of the forced socializing, so she calls in the sick the following day. Jerry & George are going to their old high-school hangout for one last slice of pizza. Kramer was at the police station where he obtained some caution tape used for crime scenes and also hears about a serial killer that is on the loose in the Riverside Park area. At the pizza parlor, George discovers he still has the high score on the old Frogger video game. Elaine's co-workers give her a cake to celebrate her return to work from being sick, she refuses to take part in any future celebrations. Jerry goes out with Elaine's friend Lisi, but she is a "sentence finisher, it's like dating Mad-Libs." George decides to by the Frogger machine, but Jerry asks him how he is going to move it and keep it plugged in to preserve the high score. Kramer discovers the last victim of the serial killer looked a lot like Jerry. George works to find a solution to his Frogger problem and Kramer volunteers the help of a man he knows named "Slippery Pete." Elaine misses the 4 o'clock sugar rush she had gotten used to from all the celebrations, so she decides to raid Peterman's refrigerator, where she finds a piece of cake. She finds out from Peterman that the piece of cake he has in his refrigerator is worth $29,000 because of its historical significance. The cake comes from the 1937 wedding of King Edward VIII. Jerry is looking to breakup with Lisi, but discovers that she lives in Riverside Park area. To avoid the serial killer, he takes Lisi back to his place where she finishes one of his thoughts that takes their relationship to the next level. Elaine tells Jerry and George about the cake and she also tells Jerry that Lisi is planning a weekend trip for them to Pennsylvania Dutch country. Jerry fears that Lisi received the wrong message as that kind of a trip is for a serious relationship. Elaine tries to even out Peterman's slice o