Pepe Da Vega, a spoilt and headstrong playboy, accompanies Bob on a mission to persuade the belligerent Chipala tribe to allow neighbouring tribes to use their sacred river to transport their trade goods. After seeing Sheena Pepe wants to exploit her and in the ensuing argument Bob is knocked unconscious. Pepe follows Sheena into the jungle alone and when he stops to cool off in the river for a swim Sheena is forced to rescue him from a crocodile (right). The Chipalas find them standing in the river and decide to sacrifice them by drowning but Bob rescues them. An unseen warrior strikes Bob with a branch, but Sheena, whose bonds have been cut, manages to escape. She returns to rescue Bob and Pepe who the Chipalas have now chosen to sacrifice. She frees them unnoticed and then directs them to go to the Chipala village. Sheena then appears and persuades Bashi, the Chief, that the river has spared these two good men. Bashi is convinced and he also agrees to let the other tribes use the river. Pepe is apologetic for all of the trouble he has caused and appears to have matured and learnt to appreciate Africa and her people. 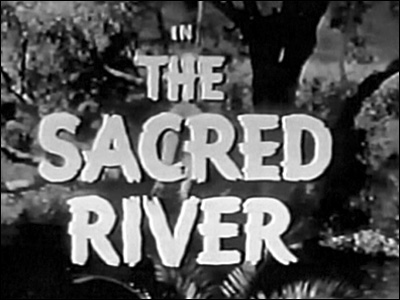