In a land where everyone has the opportunity to make a fortune, it seems that now it's Elaine's turn. The members of Fish & Cage congregate at Ally's house for an "infomercial party" that celebrates the marketing of Elaine's "Face Bra". Unfortunately, Elaine's family sues her for royalties claiming that Elaine stole the idea from her cousin Martha just before Martha's untimely death. Ally agrees to represent Elaine but when depositions appear to nail Elaine, Georgia is the first to suggest they settle. Elaine is crushed: first her family turns on her, now her colleagues are ready to abandon her. Billy and Ling are defending a computer software firm on sexual harassment charges emanating from the company's "Day at the Beach" casual days at the office. Even though participation is voluntary, Vicky Sharpe, a slightly overweight employee felt she had no choice but to participate or risk being singled out as a non-participant. John Cage remains a man transformed by his thirty-fifth birthday 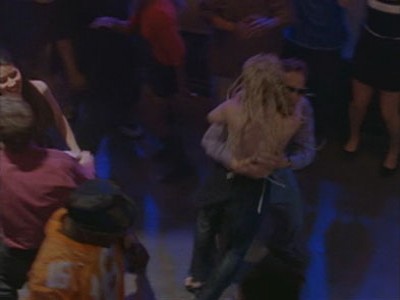