Jesse moves in with a reluctant Dylan and gets on his nerves. Valerie, unaware of Jesse's presence, drops by Dylan's house while babysitting Hannah. Jesse jumps to conclusions and assumes that Andrea is with Peter. Brandon and Clare become very competitive as they vie for a spot on College Jeopardy! Kelly invites Andrea to crash the duo's grudge match, and she wins easily. Andrea is shaken when Val tells her that Jesse was discussing the possibility of divorce. Brandon and Clare convince her to take her mind off things by trying out for Jeopardy! Dylan urges Jesse to stop being so defensive, and Jesse goes to the television studio with Hannah to ask Andrea for another chance. Andrea appears on the show and wins, and she and Jesse get back together. Donna has trouble getting in touch with Ray while he is on the road. Mel's reconciliation with Jackie gives David new hope of winning back Donna. When he learns that Donna is going to spend spring break in Portland with Ray, he decides to tag along to visit his mother. Music: 'Tracks of My Tears' by Smokey Robinson and the Miracles. 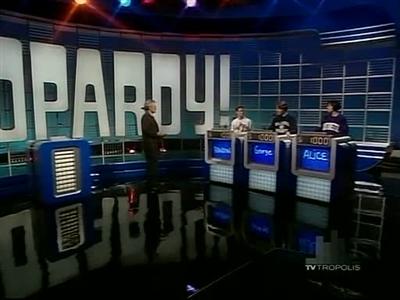