Although he loves Lauren and feels obligated to help her readjust to society, Matt expresses a desire to stay with Kelly. Kelly tries to maintain her relationship with Matt, but realizes she must bow out following a plea from Lauren. Donna becomes furious upon discovering old photos of Gina kissing Noah at the amusement park. She agrees to pose as David's girlfriend at a business function, where they keep up appearances by kissing for a photograph. They later kiss in David's truck. Donna feels guilty and forgives Noah; Gina drops hints suggesting that she slept with him. Steve discovers an irregular mole and fears that he may have skin cancer. He vows to turn his life around and apologizes for taking Janet for granted. She sleeps with him, but he returns to his old ways after tests come back negative. Dylan tries to keep his mind off drugs by having sex with Gina in public places. Gina lashes out at Dylan, as she feels that he is using her. Music: ""My Own Worst Enemy"" by Lit; ""Declarat 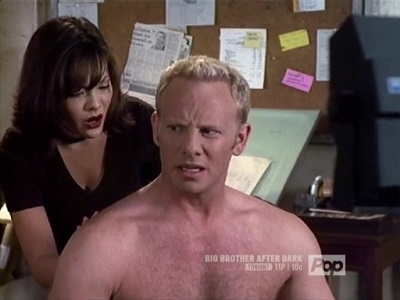