In the middle of the announcement of her new National Security Advisor, Anthony Prado, Mac is caught off guard by the breaking news of a terrorist smuggling explosives across the Canadian border. The way in which Mac and her Attorney General deal with the situation pits them squarely against each other, and Nathan Templeton takes great pleasure in publicly second-guessing Mac's every move. Meanwhile, it's Halloween, and Amy - who desperately wants to go trick-or-treating like a normal kid - is disappointed to learn that, due to security concerns, she may have to settle for a party this year instead. When Rod as First Gentleman finds himself fodder for late-night comics, it hits his son Horace especially hard. 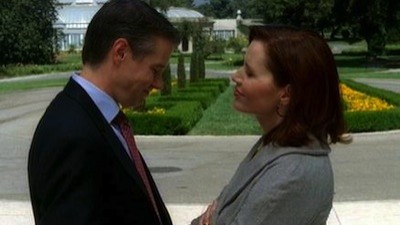