As the summer comes to an end, Felicity's father begins nagging her about her future. She hopes to prove that she has a future in her major by gaining admission to the honors art program. Ben returns from the EMT training session and announces that he wants to become a doctor. He signs up for a heavy course-load, and realizes that he will have to stay in school a fifth year to finish his pre-med requirements. Felicity is put off by Ben's sudden sense of purpose, as she expected him to be just as aimless as she is. She begins turning to the jobless Noel for support. Felicity's father comes to town and accuses her of wasting her college years. She becomes furious at his interference and decides to pay for her final year of college herself. She immediately files papers to declare her independence. Felicity shows up late for work while dealing with her crisis, forcing Ben to cover for her. He then arrives late to his first organic chemistry lecture, where the professor locks him 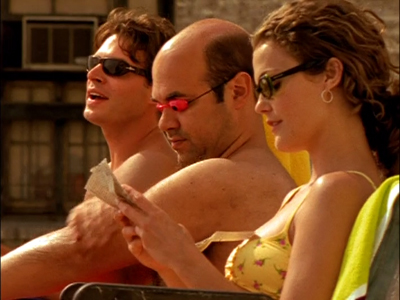