She Ain't Deep, But She Sure Runs Fast

In the third season opener, Hardcastle and McCormick go on a photo exhibition with Buzz Bird, one of the judge's old friends. To their regret, Buzz, who is a pilot, has a heart attack while flying them over a stretch of Oregon wilderness. While Hardcastle and McCormick survive the crash landing, they are stranded miles from civilization and unknowingly attract the attention of Taylor Walsh, a mountain "pirate" who has made his living by robbing tourists. After suffering through a horrible rain storm, Hardcastle decides to tell Mark how much he appreciates their friendship. Although Mark pretends to be asleep, he actually hears everything the judge has to say. The next day, the two men come across the dead body of a murdered man. Realizing that they are being tracked, they decide to speed up their journey by white water rafting. Once the two men are in the water, Taylor and his men attack. Fleeing to land, Hardcastle and McCormick manage to evade the pirates. Turning the tables, the two men capture Taylor and his men. A month later, the judge and Mark, with their prisoners in tow, finally return to civilization. 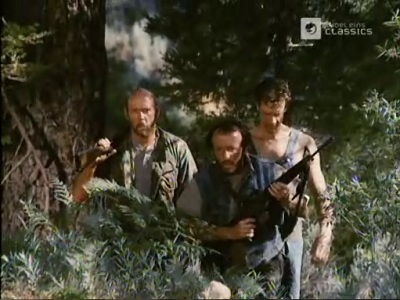