Returning from Karen's art show, John thwarts a bomb threat but it's a ruse for the mysterious group that's been plaguing John to grab Karen. The group thinks John knows something about a staff with a phoenix on it and Karen may know it as well. The trail leads to a warehouse full of dead deaf people and then John gets snatched by the NSA. They want to know about "Phoenix" but John doesn't have a clue and the head guy, Sam, lets him go eventually. Karen manages to call John long enough to give him a clue leading him to . . . Horseshoe Island. Phoenix has evacuated it after an extensive excavating operation, leaving Karen's corpse behind. The gang bury Karen and decorate her building with her last painting. But the mystery isn't quite over — John gets a report that "Yellow Teeth" is barely alive — he visits her and she warns that Phoenix is seeking a staff tied into his destiny and they won't stop coming until they get it. She dies, and the audience sees the staff is in the Vatican. 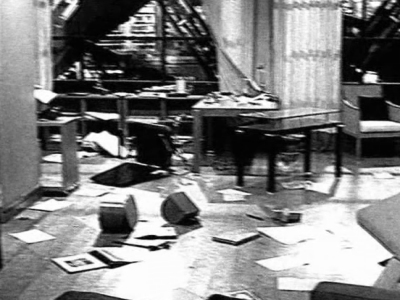