Eddie is called to the breakfast table by wife Joan who then tells him that the house next door has been sold & they will soon have new neighbours. When the removals truck arrives,Eddie goes next door to introduce himself.He sees two men, one white & one coloured. He walks up to the white man thinking he is his new neighbour,but the man is actually the removalist. Bill Reynolds introduces himself to Eddie & Eddie quickly leavess. Eddie tells Joan they have to move,he doesn't want to live next door to a coloured person. Joan tells him not to be ridiculous,but Eddie's mind is made up ! That is until he sees Barbie (Bill's wife) bringing in some belongings. Later Eddie & Joan go next door to welcome the Reynolds to the neighbourhood. Bill takes offence at one of Eddie's comments & the Booth's rush home. Eddie has another surprise in store when he gets to work, Bill is the new worker.! 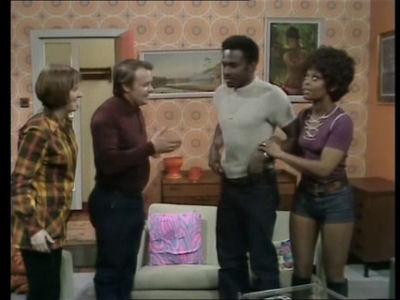