O Karma, Where Art Thou?

When Earl and Randy try to return a stolen wallet they find out taking the money had cost two newlyweds their honeymoon. In an attempt to make things right Earl takes over for the groom at his fast food restaurant. After time Earl finds out the boss is a jerk and Earl wonders how such a man with a luxurious house and beautiful wife could not be affected by the only thing he believes in, Karma. Recap: Earl and Randy wake up one cold morning at the hotel, Catalina alludes to the fact that they may be being carbon monoxide poisoned and leaves the room. Randy discovers that Earl was right when he said Randy "wasn't ready for a pet" after discovering dead "Mr. Fishy" (the goldfish) in a sealed plastic bag in his pocket. Earl however discovers number 202 on his list, "stole a wallet from a guy at a gas station." We flash back to "a few years ago" when Earl was "hanging out in a gas station bathroom, waiting for some guy to drop his pants and provide me with an opportunity." Earl screams a little too loud and a little too enthusiastically when he discovers just how much money is in the wallet and has to cover by announcing to the bathroom that "they have my favorite brand of toilet paper in here, soft stuff." Earl admits to having stolen a lot of wallets in his day, but also admits that this particular one was the mother load. And, it seems when you find yourself with a lot of money you go to Jasper's. What is Jasper's you may well ask? "Jasper"s is kind of like the mall, only it's in a storage unit and everything there was stolen from the mall." The gang spends the thousand dollars they had on many things that day and according to Earl, they were living like kings. But back to today, when faced with the reality of having to give up his helmet bought that day long ago, Randy asks Earl why he can't just give the guy back his wallet with a thousand dollars of his lottery money stuffed in it. Earl explains to Randy that the items were bought with stolen money a 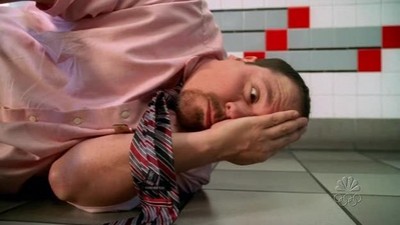