When I first met the shy superstar Mister Bloby I knew I was in the presence of greatness. I was having lunch in the BBC canteen when a hush descended across the room. It was Blobby sneaking in to have a quick snack of spaghetti, chips, beans, baked potato, shepherds pie, jelly, ice cream, fresh fruit, coffee and biscuits. You can imagine the result... He joined us for lunch and my jacket hasn't been the same since. But I knew that here was a Blob whose story needed to be told. After extensive research and lots of patience, I finally won the confidence of "Blobs" (as he is known to his small circle of shobiz chums) and this video is the result... but we got more than that. For the first time ever he allowed camerras to film him at home. We went with him everywhere - shopping, decorationg, working out, and even going on holiday. So sit back and enjoy as Blobby also shares with us his T.V. appearances with the likes of Will Carling, Valerie Singleton, Wayne Sleep, Hudson and Halls and Garth Croocks. I hope you like this "Blobumentary" because I certainly enjoyed making it. 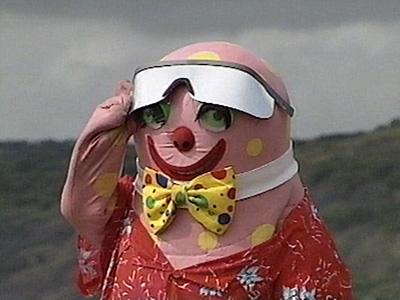