George is tired and needs to take a nap while at work; he finds the perfect place, under his desk. Kramer has taken up swimming, but he finds the pool too constricting for his needs; he begins swimming in the East River. Elaine's date is worried about his back and hers; he sends her a mattress and she gets the wrong idea. She gives the mattress to Kramer. Jerry is getting new kitchen cabinets, but the contractor is constantly asking him questions. George gets Jerry's contractor to make some modifications for his desk, including space for an alarm clock. Steinbrenner is in George's office looking for him; he decides to wait for George to return. George gets Jerry to phone in a bomb threat in an effort to get Steinbrenner out of his office. After finding George under the desk, Steinbrenner thinks he has ESP and would be perfect to meet the terrorist's demand of a fitted hat day. Meanwhile, Jerry's contractor, left on his own, has made a change in Jerry's kitchen that no one likes. Elaine gets her mattress back when she gets the right idea; however, Kramer has fouled it up with the stench of the East River. Elaine's boyfriend discovers the benefits of swimming in the East River. Steinbrenner hears a ticking sound in George's office, thinks it's a bomb and calls in the bomb squad. Jerry decides he needs his old kitchen back. Elaine throws her back out trying to get rid of the mattress. Kramer's river gets crowded and George finds a new place to nap. 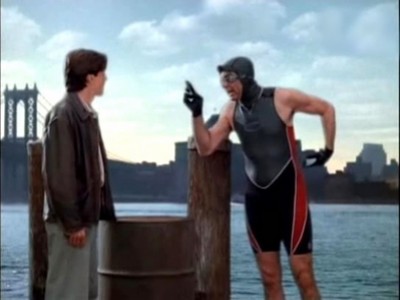