The gang tries to get back into town after leaving the Mets game early in the 8th inning, the Mets are down 9 - 0. On the highway they run into trouble with a maroon Volkswagen Golf. George comments on a new movie he saw about the Hindenburg disaster and the clever comment he made during a quiet moment after the explosion. As they approach 5th Avenue traffic slows down and music can be heard, they realize they have forgotten about the Puerto Rican day parade. Elaine worries about getting home and seeing 60 Minutes as part of her weekend wind down. Kramer spots a way out if Jerry can worm his way over to the right. They almost make it over until they reencounter the maroon Golf. Elaine bails out of the car to find alternate transportation. George bails out of the car when he spots a theater screening the Hindenburg movie; he decides he wants to repeat his glory. Elaine decides the cab she hired isn't working, so she bails out of the cab, only to have it start moving again and again. George's attempt to be funny at the movie is undermined by a guy with one of those funny laser pointers. Kramer suggests that he and Jerry abandon his car. The laser pointer guy (a lousy prop comic) gets all the laughs as George's line bombs and he is humiliated. Kramer cuts a deal with the maroon Golf they are go to get access to the short cut when Jerry makes an apology wave. George returns to the car with the red dot of a laser pointer appearing all over parts of his body. Jerry rescinds his apology wave just as he is about to pull in the alley; Elaine arrives back at the same spot in her cab. Jerry's apartment is seen, but no one is home. Elaine seeks an alternate way home. Kramer seeks a bathroom. Elaine works her way over to the parade route and looks for a way across. She leads a group of people on an escape route underneath a reviewing stand ala The Poseidon Adventure. Kramer spots an apartment for sale and poses as H.E Pennypacker, a wealthy industrialist, to get access to a bat 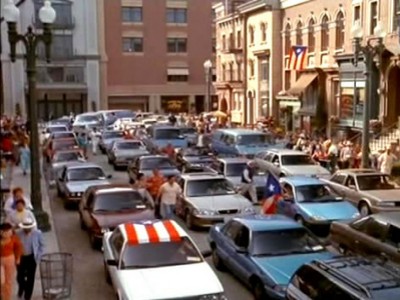