Queen Moon shares her story of when she was a teenager and her mother (Star's grandmother) had died. She had to decide between signing a peace treaty or going to war against the monster army, led by "The Lizard". She partly melts the ice encasing Eclipsa, to learn some dark magic from the forbidden section of the Book of Spells. She confronts The Lizard (Toffee) and uses the dark magic to sever his finger, which he is unable to regenerate. Toffee flees. 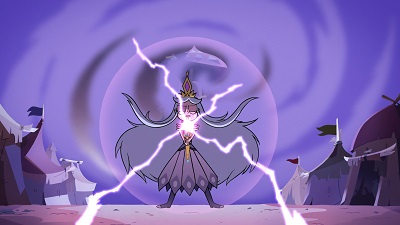