Marco and the King

King River tries to take care of the kingdom by partying it up every day, but he and his subjects wear down quickly. Marco arrives, but River has to deal with angry villagers as well as a large monster who approaches the castle after he yelled at it to leave. River tries to hide, but Marco encourages him to stand up to the monster. River rallies the villagers to fight the monster, and it is revealed that the monster thought River was beckoning it to come to the castle, not to go away. It leaves peacefully, but as River is about to have a party to celebrate, Ludo and his minions appear and take over the kingdom. 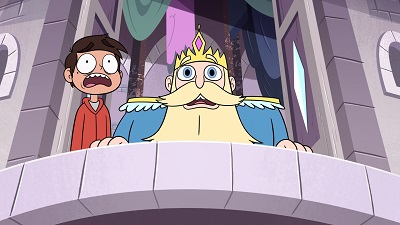