Who Needs an Enemy?

Charlie Osgood has been robbing his partner Eddie Turtin for years. When Eddie finds out, he threatens to go to the police unless Charlie can give him back what he stole. Determined not to ply, Charlie and his girlfriend Danielle decide to fake Charlie's suicide and then leave the country. Charlie gives Eddie hints of suicide and then throws an explosives laden dummy over a bridge. After blowing up the dummy in the water, Eddie becomes convinced that Charlie is dead. Eddie gives the eulogy at Charlie's memorial service as Charlie heads to the office to pick up his stolen cash. He grabs the money and, afterwards, he and Danielle celebrate with drink. Charlie passes out after the drink and awakens to find Eddie and Danielle. Charlie realizes that he has been set up. Eddie planned to take the money and blame the theft on his dead partner. Eddie and Danielle get rid of Charlie for good by pushing him off a pier and blowing him up in the water. 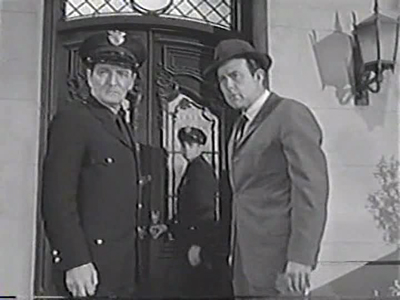