Doug and Carrie get free tickets to her firm's annual golf outing at a private club. They have four tickets and usually bring Deacon and Kelly, but with their recent separation, things have changed. Not wanting to lose out on the opportunity, Deacon meets an available gal, Leslie, who he brings along to complete the foursome. Doug and Deacon are having a great time, but unfortunately, Carrie is not feeling the connection with Leslie and makes an attempt to set Deacon up with another co-worker while at the golf course that she thinks she'd have a better time with. In the meantime, Deacon asks Holly to watch his kids over the weekend while he's gone but doesn't realize that Holly may be pining away for him. 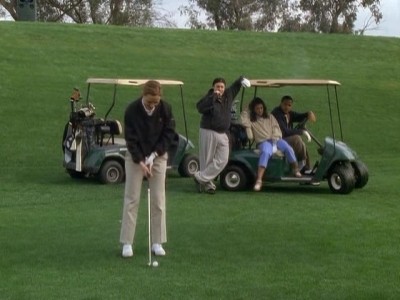