The Monkees and Mr. Swezey, Mrs. Homer, and Mrs. Filchok, their elderly neighbors, face eviction to make way for a parking lot. "Private Citizen" Michael protests to Mayor Motley's office, unaware that the mayor is being paid by Wilbur Zeckenbush, a corrupt construction tycoon bent on tearing down the whole city for parking lots, so that no one may enter or exit without paying him a toll. Swezey, Homer, and Filchok are then forced to move into The Monkees' pad until they find new places. Convinced he must run for mayor himself (he's the only one with a hat to throw in the ring!), Michael searches for a public image, trying out as George Washington, Abraham Lincoln and Lyndon Baines Johnson, but finally settles on his own little wool hat. Micky, David and Peter act as campaign manager, campy aide, and aide-de-camp, respectively, as they launch an outrageous campaign singing "No Time," but all their little political tricks go wrong because Zeckenbush pays everybody off. To make matters w 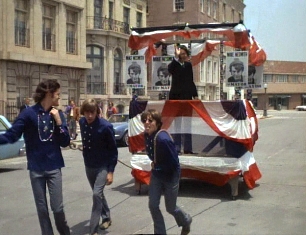