CAPSULE: Melissa has conflicts with Lee over finding him a new job and with her father over his plans to buy her building. At a dinner with her parents, the Steadmans and Lee, Melissa mentions that she's concerned about her building turning into condominiums. Her father Murray surprises her when he invites her to his office to propose that he co-sign a loan for her which would allow her to buy the building. Melissa runs across Lee's sketchbook and she's impressed with his drawings. She tells him he's overqualified to be a house painter and that she could help him. He says the drawing is just for fun. Later at DAA, Melissa is there when Courtney Dunton comes into Elliot's office with some portfolios of job applicants. Melissa gets the idea to suggest Lee for the job. Melissa tells Lee about the job opening for a trainee at DAA. He doesn't seem interested, but goes there to be interviewed. His interview with Courtney is awful; he has no background at all or desire to work in advertising. 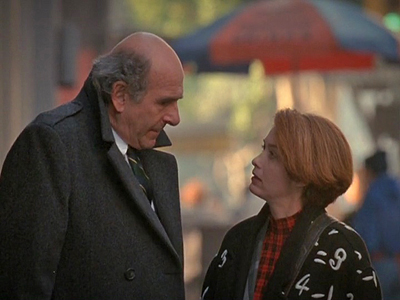