The fourth part of This Is America, Charlie Brown starts out with Charlie Brown calling Linus about how his science fair project is doing. Linus is building a model of a spaceship for the contest. The night before the contest Linus dreams that he, Charlie Brown, Lucy, Peppermint Patty, and the rest of the Peanuts gang are in space. They are in a space station for 90 days. Jason Welker of the Television news network is there to talk to them on TV. Jason Welker talks to all of them and asks the jobs of everyone. The crew's jobs are Charlie Brown is the cook, Linus is the scientist, Lucy is the captain, Peppermint Patty is in charge of fitness, Snoopy has had the most experience in space, Franklin is in the social worker, Even Woodstock has a job; he shows how to fly in zero gravity. Lucy then gives a tour of the space ship. She shows the rooms and the kitchen. In the kitchen Snoopy chases his food. Outside the spaceship things go wrong. One of the panels are broken on the spaceship, so S 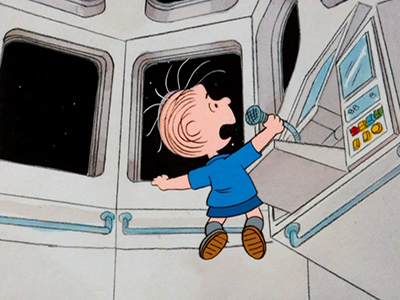