The second debate occurred on November 14, 2015, at the Sheslow Auditorium at Drake University in Des Moines, Iowa. It aired on CBS News and was also be broadcast by KCCI and The Des Moines Register. This was the first debate to be broadcast over nationwide network television, the previous debate having gone over cable. CBS News Political Director John Dickerson was the principal moderator, with participation by Kevin Cooney of KCCI. The day before the debate, November 13, was the day of the November 2015 Paris attacks, where nearly 130 civilians were killed by radical Jihadist terrorists - specifically, members of ISIS - across the city of Paris. As a result of the attacks, after initial speculation that the debate might be cancelled, CBS announced that, while the debate would go on as planned, the focus of the debate's content would be dramatically shifted over to foreign policy and terrorism. In addition, a moment of silence was held at the beginning of the debate in memory of the victims. One of the most memorable moments of the debate was when Clinton defended against claims that she had ties to Wall Street bankers, particularly when Sanders pointed out that some of Clinton's largest donors were from Wall Street. Clinton retaliated by claiming that, as the Senator from New York during the September 11 attacks, she had to work closely with Wall Street since the attacks were so close to Wall Street. Clinton immediately received scrutiny over these comments, including when Dickerson highlighted a Tweet from a viewer reading, "Never before have I heard someone use 9/11 to justify millions of Wall Street donations," which drew thunderous applause from the audience, and led to both Sanders and O'Malley also attacking Clinton for those comments. Post-debate criticisms arose from all across the political spectrum, from Republican National Committee Chairman Reince Preibus, to Clinton's own former campaign manager, Patti Solis Doyle, who said that t 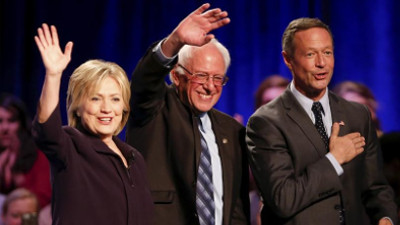