Things That Go Bang in the Night

Val wants to move back to Buffalo, but her mother has checked into a mental facility and cannot care for her. Brandon explains Valerie's situation to Steve and asks him to give her another chance. A pool hall acquaintance supplies Dylan with drugs. Brandon behaves coldly toward Valerie after she skips a party to go to Dylan's house. She reveals the gravity of Dylan's situation and pleads with Brandon for help. Dylan finds his gun and points it at brats who vandalize his house on Halloween. He shoots up his living room. Brandon confiscates Dylan's gun, ignoring his threats of legal action. After Dylan passes out, he stays to watch over him. Ray reacts angrily after seeing Griffin kiss Donna at a Halloween party. Donna finally tells Griffin about Ray; he responds rudely and gets slapped. Ray agrees to respect Donna's decision to remain a virgin. Andrea hesitates to take Hannah to a Día de los Muertos ceremony. She enjoys the experience, but expresses reservations when Jesse's catholic aunt gives Hannah a necklace of the cross. David and Clare camp out in the desert to look for aliens. Music: 'Dream Baby (How Long Must I Dream)' by Roy Orbison, 'Papa Was a Rolling Stone' by the Temptations, 'Twilight Zone' by Golden Earring. 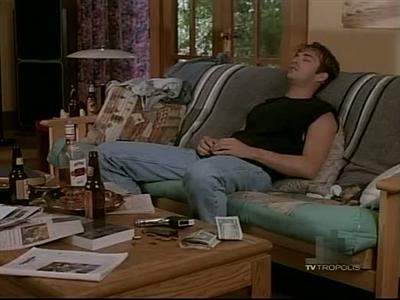