Cindy convinces Dylan to come over to the Walsh house, where he is confronted by an intervention. Valerie and Clare run into each other during a shopping excursion and discuss their exclusion from the event. Dylan reluctantly checks into a rehab clinic. He checks out during his first day and forces Valerie to drive him home. She walks out after he gets blitzed and contacts his dealer. Dylan begins shooting heroin. He rolls his car while trying to elude the police. Ray endures an uncomfortable dinner with Donna and her parents. Ray's mother, LuAnn, encourages him to capitalize on Donna's wealth. David and Clare make an X-rated video of themselves. The tape accidentally ends up in the hands of Dr. and Mrs. Martin. Kelly is invited to appear on the cover of Seventeen Magazine, but isn't very excited by the opportunity. Music: 'Every Day of the Week' by Jade (#20, 1995; from the 90210: The College Years soundtrack); 'Walk Like a Man' by the Four Seasons (#1, 1963); 'It Keeps You Runnin''' by the Doobie Brothers. 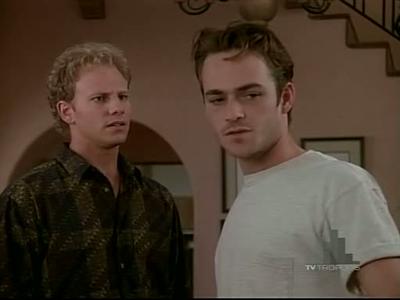