The Cloudbabies are hard at work. Bobo and Fuffa race through the sky together, going 'choo choo' and pretending to be the Skytrain. As they zoom past, they cause Baba Blue to drop his toolbox and Baba Yellow to smudge Rainbow's stripes. She tells Fuffa and Bobo off and the two of them go off in a sulk. Fuffa sits in the sky and watches as big clouds drift over the horizon. She asks Rainbow where they are going, and he explains that they are moving on and that one day she may do too. As Rainbow leaves, Fuffa thinks moving on would a brilliant idea as she could then play 'choo choo' whenever she pleased. She descends to the Cloudyhouse and tells the Cloudbabies that she will be leaving. They all stand in shock. Lined up to say goodbye, Fuffa agrees to have Baba Pink escort her some of the way. Bobo White soon follows and they stop by Little Star to say goodbye. He's too sleepy to understand what is going on. As they reach the bigger clouds, she realises that up close, they really are very big. Sun, Moon and Rainbow come to say goodbye and Bobo and Fuffa have one last game of 'choo choo' together. Soon it is time and Fuffa nervously goes to join the larger clouds as they move towards the horizon. In moments, Fuffa realises that her real home is with the Cloudbabies and Bobo White and she turns back, declaring that she will be staying. Baba Pink sighs with relief as Fuffa and Bobo zoom off to find Little Star. 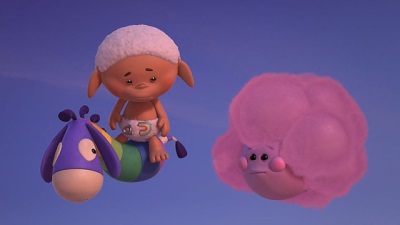