The convicted spy Jason Magida successfully escapes from Groton brig and his way leads him straight to Adm. Chegwidden, who was involved in his court-martial back then. Magida takes Chegwidden, Mac and Bud hostage. Claiming he was framed, he insists the three officers retry him. Harm, in between trying from outside to solve this situation with Webb's help, calls in a SWAT team and then has his hands full of keeping the team from killing Magida. Locations: Groton, Conn.; Falls Church 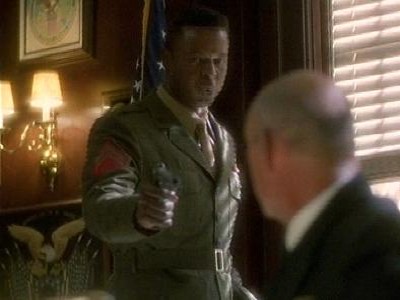