When a convicted pedophile, desperate to prove his innocence before his terminally ill mother dies, escapes from prison and kidnaps his accuser to force him to recant his story, Benson finds herself in the middle of a hostage situation beginning to believe his story. After he is disarmed, Benson reviews his case, uncovers the web of corruption and deceit which caused his wrongful conviction, and reunites him with his mother and his son 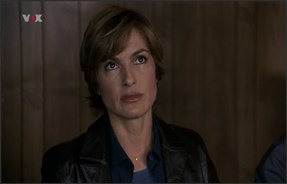