Without their cutie marks, the six ponies are trapped in the village while Starlight waits for them to accept their fate. The six send Fluttershy, who has been the most open to the townspeople, to act as though she has accepted Starlight's ways in order to help the others escape. That night, Fluttershy sneaks out and discovers that Starlight has never given up her cutie mark, using paint to mask her real one, and has taken her friends' cutie marks to her house with larger plans for Twilight's mark. When Starlight frees the others the next day, Fluttershy exposes Starlight's ruse to the townsfolk by splashing water on her. As Starlight flees with the six's marks, the townsfolk reclaim their own marks and chase Starlight down, successfully recovering the six marks. Starlight manages to escape, while everyone returns to the town to celebrate getting their individuality back. 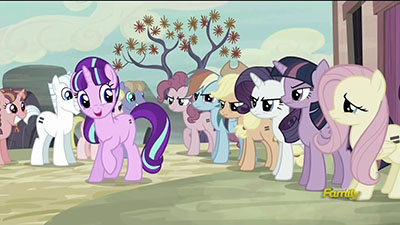