Attack from the Clouds

During the night, Ape City is awakened by the sounds of huge flying objects overhead. It is a flying monster, but the apes cannot see it. The Ape Police ready themselves for an attack as Urko arrives. He believes that it is his stolen plane being used in a secret plot to have him overthrown. Zaius later tells the Senate that the flying object has been scared off and that Urko has been given one last chance to find Blue Eyes. In New Valley, Bill and Judy prepare to leave and return with the aircraft. As they watch over their herd of strange animals, the flying monster swoops down and carries one of the calves away, then disappears after entering a cave. Meanwhile, Urko is readying another attack on the humanoids. His aides assure him that the plane is being searched for. During the night, Bill and Judy spot an ape patrol searching for the P-40. The next day, they reach the aircraft exactly where they left it. Judy has trouble starting the engine just as the gorillas approach but is able to lift off at the last minute. Back at the human settlement, the monster has attacked again, causing a stampede. Nova is nearly trampled. The herd is chased into a cave, safe from the monster for the moment. Jeff plans to cut an opening in the hillside so that food can be taken to the herd. Bill and Judy have to risk flying over Ape City in order to conserve fuel. Urko spots the plane and is furious, but Zaius tells Zira and Cornelius that he is glad the aircraft is out of Urko's hands. Bill and Judy reach New Valley just in time to engage the monster in an air battle. After several perilous moments, the P-40 strikes the monster with its landing gear and the beast plummets into the lake below. Bill and Judy land safely, but the monster survived the fall. 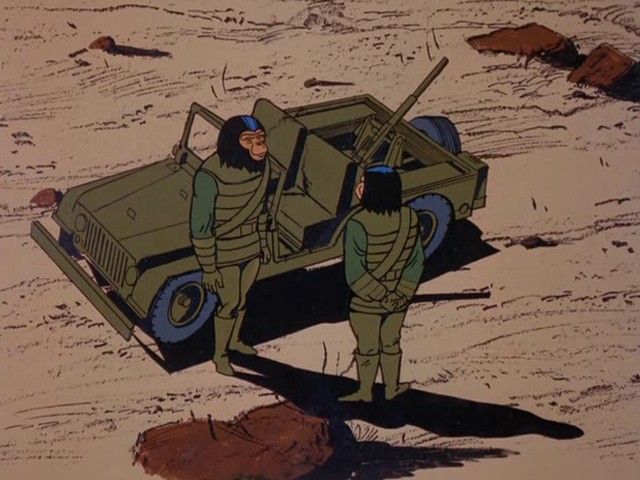