Bill, Jeff and Judy begin building rafts to help the human tribe reach New Valley on the river and escape Urko's patrols. In Ape City, Dr. Zaius visits Cornelius and Zira in their lab to thank them for stealing Urko's plane. By doing so, he feels that they have saved simian society from Urko's dictatorship. They again assure him that they had nothing to do with the stolen plane, but Zaius insists that their secret is safe with him. He leaves them with the news that Urko has been given permission to attack the human caves to find Blue Eyes. Finally, the rafts are finished and Bill and the others begin the long journey towards New Valley, following the map given to them by Cornelius. The trip takes them through thick jungle growth and swarms of bats. Some of the humans get sick and want to turn back, but Bill decides that they have no choice but to press on. By nightfall, the jungle has given way to a desolate, desert area. Meanwhile, Urko is still enraged over the theft of his plane and orders it found. Since the plane was a military secret, he suspects someone on the inside to be responsible. Urko offers a reward for the thieves' capture and orders the attack on the humans to begin at dawn. Following their map, Bill, Jeff and Judy lead the humans from the rafts across the desert. Despite the terrible heat and wind, they press on. When the army arrives at the river, Urko realizes that the chopped trees mean the humans escaped by raft. Furious that his men are not prepared for water travel, Urko returns to the city for the Council's approval for a water maneuver. The next day, Bill and the others come upon an incredible sight: the wreck of a futuristic United States spaceship! A stranger appears and introduces himself as Ron Brent. He tells them that he has been marooned here since Nova was a little girl. He left Earth on August 6, 2109 from a launch pad in the Mojave Desert. Cape Kennedy had been turned into a museum sixty years before he was born. After crashi 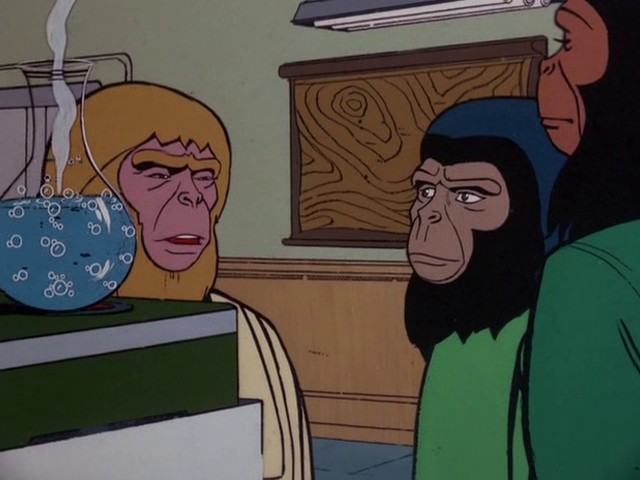