Kramer's brutal honesty gets Jerry in trouble with Susan's old college roommate, Sally Weaver. Elaine obsesses over the meaning of a cartoon that appears in The New Yorker. Elaine and later Kramer comments that George's new girlfriend looks a lot like Jerry. In fact Kramer says "just because they look-a-like, that doesn't mean you're (George) secretly in love with Jerry." Jerry confronts Kramer's frankness. Sally claims that Jerry has ruined her life, she's quitting the business, Jerry can't have that on his conscience, he talks her back into the business. Kramer makes an important life decision, the only way to keep his mouth shut, is to stop talking. Before he finally stops talking, Kramer's constant references to the looks of George's girlfriend, drives George out of Jerry's apartment. Elaine goes to The New Yorker to seek an explanation for the cartoon. Discovering that the editor didn't understand the cartoon either, he liked the kitty. Sally opens her new one woman show about "Jerry Seinfeld- the Devil." Elaine's complaint, gets her the opportunity to do her own cartoon for the magazine. Jerry confronts Sally about the content of her show. Newman is her biggest fan; finally, he can see a "show that is about something." Kramer discovers the disadvantages of not talking. George worries about why he really likes his girlfriend. A clip of Sally's show appears on channel 9 news, it features Jerry's latest confrontation with her. Elaine works all-night on her first cartoon, it is okay, but it is not the gem that Elaine thinks it is. Jerry calls Sally and the message he leaves on her answering machine appears in her show as well. Later the lawsuit he filed appears in her cable special. Jerry decides to cut off all communication with Sally. Elaine's first comic appears in The New Yorker. Peterman thinks it is a great cartoon, until he realizes it is a Ziggy and he can prove it -- "Quick Elaine, to my archives." George and his girlfriend discuss their relationship, unt 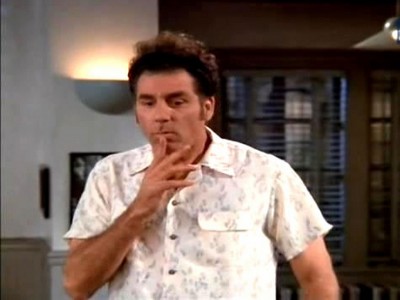