Kunihito apologizes to Kuniko for his apparent betrayal, holding her off while Ryoko escapes to the Eternal Forest with Mikuni. Enraged, Kuniko attacks Kunihito, only to be stopped by Momoko who arrives to tell Kuniko of Kunihito's true motives. It's revealed that Sayoko survived her fall from the upper deck because Momoko intercepted her descent. Ryoko arrives in the chamber once occupied by Hiruko, revealing a hidden passageway into the bowels of Atlas itself. Shogo, Leon, and Sion attempt to stop her, but she eludes them and they descend down through the shaft. Sayoko is quick to follow. She voices Ryoko's motives in forcing Mikuni to become the successor. She attacks Ryoko, but is ultimtely knocked off the descending platform, presumably falling to her death. Nagiko and Talsian are seek talking about the hidden catacombs they discovered during Atlas's construction and the secret behind the forbidden relics they uncovered down there. The secret behind Zeus's creation is finally revealed, as well as the system protecting Atlas from violent oscillations and tremors. Back up in the ceremonial chamber, Kuniko and Kunihito finally manage to break through the barrier to the elevator shaft Ryoko took. Kuniko hugs Momoko and Kunihito apologizes for his actions. Kuniko playfully scolds him, saying he apologizes too much, before leaving down the shaft. Meanwhile, Karin is desperately struggling to stop MEDUSA's rampage across the economic markets. Talsian appears on the terminal and declares a way to stop MEDUSA. A rather comical chibi battle ensues and Karin is knocked into a separate field, greeted by the teddy forms of her parents, who reveal the real reason as to their extended absence. It's only a virtual program operated by Ryoko, but it turns out that Karin's parents had died three years before. Karin suffers a breakdown and Ryoko returns to reality to command Mikuni to draw the bejeweled spear and assume her role as successor. Mikuni, however, refuses, but after th 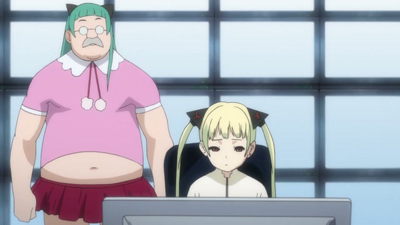