Kuniko's arrival stops Mikuni from drawing the bejeweled spear and Ryoko states how impressed she is that Kuniko made it this far. She challenges Kuniko to pull the spear out herself. When Kuniko refuses, Ryoko takes Mikuni hostage and threatens to kill her, forcing Kuniko's hand and revealing that Kuniko and Mikuni are actually sisters and that their birth mother is no longer alive, but not exactly dead either. It is revealed that Kuniko and Mikuni were artificially created and that Kuniko is in fact a clone of Himiko, the mummy of the goddess discovered beneath Atlas. It turns out that Ryoko's body is failing her and she intends to invade the body of the new successor. Outside, a figure resembling Takehito expresses his disgust at the use of human lives to construct Atlas just before setting off a chain of chemical bombs. MEDUSA has gained complete control of the computer systems. Kuniko is forced to draw the spear in an attempt to stop MEDUSA from starting a nuclear war, but she's too late, as nuclear missiles are launched all across the world, launching incomparable amounts of dust into the already weakened atmosphere. MEDUSA himself predicts a nuclear winter with dropping water levels and temperatures everywhere and finally relaxes, convinced that he's safe at last. But his plans are breached when he opens the floodgates of the islands, thinking them useless and releases a tidal wave crashing toward him. It turns out that the missiles launched were a ruse to get MEDUSA's guard down and release the floodgates holding the water back. MEDUSA drowns in the rising floodwaters and Karin mourns his and her parents' deaths. Angered at the breach in her plan, Ryoko attempts to take over Kuniko, but Kuniko mocks her and a brief skirmish ensues, ending with Kuniko impaling Ryoko on the spear. Ryoko perishes and her life energy is absorbed by Zeus trying to revive Himiko. Sayoko appears in the catacombs, shaken but unharmed. Kuniko is carried away by the spear to the heart 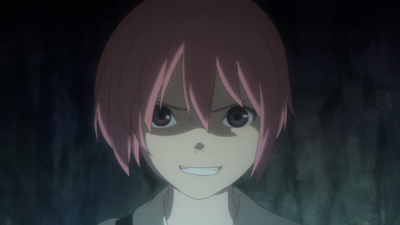