Star hosts a sleepover with her girl classmates(Janna, Jackie, & Starfan13) and Pony Head. They recruit Marco to play a truth or dare game called "Truth or Punishment", where the Truth or Punishment cube administers punishments to everyone when someone lies, and refuses to free everyone until the game is over. The cube's final question is who is their greatest crush. Marco admits he likes Jackie, but the cube insists someone has lied, and informs that Marco wasn't the one who lied. When Star makes a monologue to the cube about how a person's mind and heart disagree, and how feeling are always changing, the cube starts to malfunction after Star makes some examples and self-destructs. After everyone goes home, the discarded cube springs to life one last time, answering the question about Star's crush, but it gets destroyed before the audience gets a clear answer. 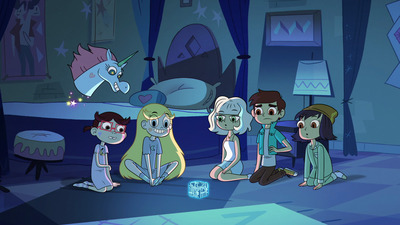