Spider with a Top Hat

Spider With a Top Hat has been entertaining Star's wand monsters at a party. Afterwards, he tries to learn a fighting move where he tries to blast through a wall. Despite getting training from Narwahl and Rock, he is unable to break through the wall. The other monsters are summoned for a fight but they are beaten up. Encouraged by Rock's words, Spider is finally called to fight a monster'. 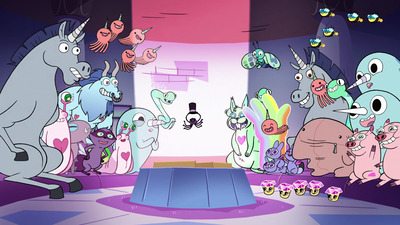