Marco borrows Star's Dimensional Scissors to find a place to walk the laser puppies, but he soon becomes accustomed to its conveniences, opening a bunch of portals from his bed to access things. Hekapoo, the forger of all of the Dimensional Scissors, pulls Marco into her dimension and confiscates the Scissors as they did not belong to him or Star (Pony Head had stolen them and gave them to Star). Marco must earn the scissors by having to blow out the flame atop Hekapoo's head. Star goes to Hekapoo's dimension to recover Marco, who had chased Hekapoo for 16 years before winning the challenge. When they return, Marco reverts to his teenage body as only a few minutes have passed on Earth time. 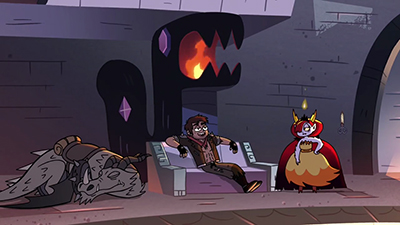