Star's parents send a fairy godmother named Baby to evaluate Star, who takes the task seriously, as failing the eval would mean she would have to return to Mewni. At first, Star cleans up her room, shoving stuff in closets or dimensional pockets, but when Baby starts asking Star questions, and things start falling out of the pockets, Star's responses are met with the same neutral phrase "Interesting." followed by jotting down of notes. Meanwhile Marco tries to help Star by bringing Baby food. Baby then asks Star to bring her an apple using magic, but Star fails to do the task despite repeated tries. Baby concludes that Star failed, but Star tries one last time and ends up using the apple seeds to grow an apple tree which drops an apple for Baby. Star's parents learn from Baby that despite not being organized, losing the book of spells, and failing to do simple spells, Star has magic potential way ahead of when her mother was her age, and might even be comparable to Queen Eclipsa. 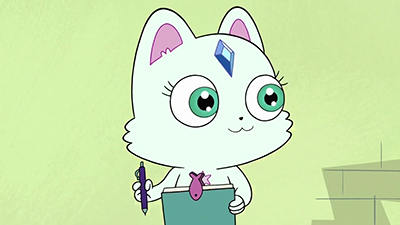