When they reach the top floor, they are surprised to see a beautiful garden. Riannon feels a cold presence despite the beauty of the garden. As they go further, they notice the Emperor's corpse sitting at the center of the garden, and then a voice greets them. They are shocked to see a figure in white before them. Ogam realizes that Lector the Astrologer from the Emperor's Court is the Lector, one of the 12 Angels, and the one who killed Arthur's father and framed Arawn for it. Arthur uses Dyrnwyn to destroy the Garden, which is revealed to be an illusion. A passageway to the Heavens opens, and Skeleton Warriors attack, but Arthur and Arawn manage to attack Lector. Arthur manages to wound Lector, making him furious and consequently summoning Merkadis. Ogam tells everyone that Merkadis is the one who killed Arawn before. Lector then becomes one with Merkadis. Arawn and the others are nearly killed when Merkadis destroys Palladium, but are saved by Taliesin and the Dragons. 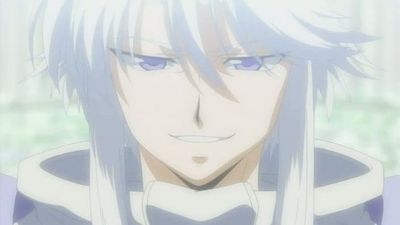