Merkadis fires the Electrum Cannon and destroys a mountain. It then uses tentacles to scatter the army, but Arawn, Arthur and the others meet up. Ogam reveals that the only way to stop Merkadis is to use the Power of Words, but the only one who can do it is Riannon. Arawn and Arthur buy time for Riannon to remember the Words of Power; they succeed in cutting several tentacles but are unable to damage Merkadis' main body. Arawn is nearly killed by a shot from the Electrum Cannon, but seeing Pwyll in Arthur encourages him. Riannon remembers the Power of Words with help from Primula and uses it to cripple Merkadis and expose the Angel Lector who begs the Creator Watos for help before he is killed by Arthur. Later in Avalon, Pwyll tells Arawn that Arthur must now become Elf-King of Albion as Arthur Pendragon. Arthur becomes Elf-King of Albion. Limwris tells Ermin to continue writing their stories; Rathty comforts Llyr and forges a commemorative medal for Albion's rebirth. Taliesin and Epona continue their love/hate relationship, and Ogam reveals the Brigantes Prophesy's truth; Taliesin will be an errand boy for the Dragon he befriended for the rest of his life. Arawn leaves his sword at Myrddyn's memorial, and Rhiannon thanks the Morning Star for his guidance. 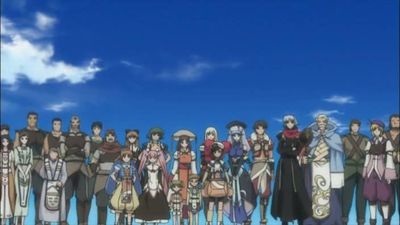