Ebbtide VI: The Wrath of Stan

It is the annual "Buy Sophia New Shoes" day, and Dorothy is forced to take her. Blanche also tags along, mentioning that it might be fun. Meanwhile, Uncle Angelo drops by and Rose is there. Since she is trying to find a good story to report on, she is more than happy to hear Angelo's story. Apparently, his apartment building is infested with huge bugs. When the ladies watch the news, Rose insists they watch the news story about the bugs. Dorothy then tells Rose she and Stan are the landlords. Rose then tells her she didn't realize there was a family side to the story. She won't give up on the story, and a minute later, the cops show up to arrest Dorothy. They have a trial, and Stan drops his attorney for a younger woman who knows nothing. The defense lawyer is unbeatable by giving compliments to the witnesses which makes them vulnerable to his advantage. Stan and Dorothy end up losing and are forced to live in a sleasy apartment building for a while. 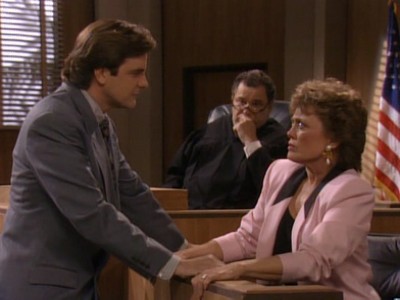