Mulder is thrown in jail at the Area 51 compound but is released when it is discovered that the flight data recorder he stole was a fake. Scully comes to her senses and realizes that the Mulder she sees isn't who he really is and heads back to Nevada to help the real Mulder. Meanwhile, the mechanism that caused the body swap is rapidly snapping back, undoing everything in its wake, and Mulder and his alter ego must race to put themselves back where they belong. 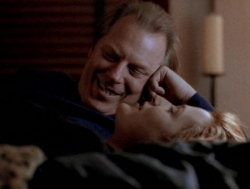