J.R. suspects Cliff Barnes in the shooting of Bobby and he pressures the police to find answers fast. Vaughn Leland tries to patronize Cliff but he threatens to file a complaint against Vaughn about unfair banking. Pam questions Cliff about his marrying Afton. Bobby asks Ray and Donna to check the office phones for bugs. Bobby tells Jenna they can't get married until he regains his sight. Sue Ellen is touched by J.R.'s brotherly loyalty during Bobby's incapacitation. Cliff and Sly have an honest exchange about J.R.'s setup. Bobby fears J.R. will take advantage of his absence at Ewing Oil and he asks Donna to watch over things for him at the office. J.R. asks Sue Ellen whether it was her who tried to kill him. Sue Ellen reveals to J.R. that there was no "affair" with Peter Richards. Pam tells Bobby about Katherine's devious trick in writing the letter which led to their divorce. Donna and J.R. draw their battle lines, as do Pamela and Jenna. Cliff celebrates his offshore strike with Jordan Lee. 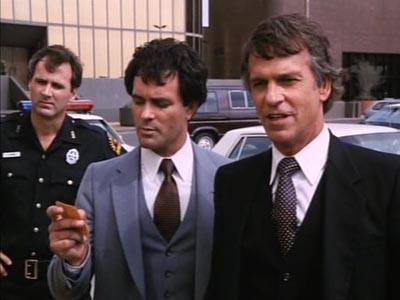