is a rare and exciting chance for New Zealand viewers to see our most successful comedy duo do their thing on the world stage. In March 2006, Bret McKenzie and Jemaine Clement aka Flight of the Conchords embarked on a revealing and hilarious odyssey into the political and musical heart of the United States of America. The result is a very amusing comedy documentary jam-packed with the Conchords’ classic hit songs. With a Gibson Group documentary crew in tow, they travelled from Wellington, New Zealand to Austin, Texas to launch their folk parody act upon one of the toughest music industry events in the world: the South By SouthWest music showcase. Superstars Morrissey, Neil Young, Peaches, Lyle Lovett and Kinky Friedman appear alongside New Zealanders Coco Solid, The Brunettes and Flight of the Conchords themselves in this enlightening look at what it takes to break into the ruthless American music market. In their first experience as documentarians, McKenzie and Clement meet famous folk and political candidates, real cowboys and regular musicians, as well as their own management and fans. Important questions are asked. Is it better to be called a band, or a duo? Can one good rock show change the world? Can a comedy act break through onto the ruthless music circuit? Has anybody in America heard of any bands from New Zealand? Is stage-diving a good idea? The answers can be shocking. In its 20 years of existence, SXSW has become widely regarded as the most important showcase of contemporary music in the world. Held every March in the state capital of Texas, approximately 1500 bands line up to tout their wares to record labels, managers, tour promoters, festival bookers and venue owners. Flight of the Conchords had a greater head-start than most when they hit the ground in Austin this year: they already had a record contract (with Sub Pop – the legendary US indie label that signed Nirvana); management (the guy behind Good Charlotte and My Morning 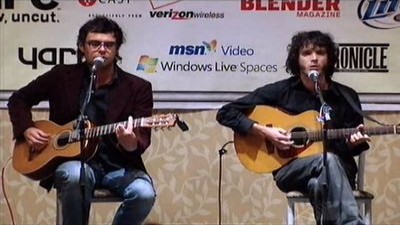