Harm & Mac are sent to Belfast, Ireland when the child of Navy Lieutenant Nivens suddenly turns up missing and a note left behind indicates it was taken by Lorcan Barnes of the Irish Republican Army (IRA), who also happens to be the child's father. Arriving in Belfast, Harm & Mac are immediately at odds with the Royal Police, when they suggest ""negotiating"" with the IRA for return of the baby. Not finding much help, they go and search out the IRA on their own. Directed to a bar & told to ask for a particular type of beer. While playing darts, a man showing Mac the proper way to throw a dart whispers in her ear to go to an abandoned storefront. With the Royal Police tailing them, Harm and the baby's mother risk going to the storefront, while Mac boards a bus and leads the Police away from Harm. Once at the storefront, Harm is knocked unconscious and taken downstairs. He is then interoggated by a member of the IRA who we learn is Barnes. He doesn't believe the child has been kidnap 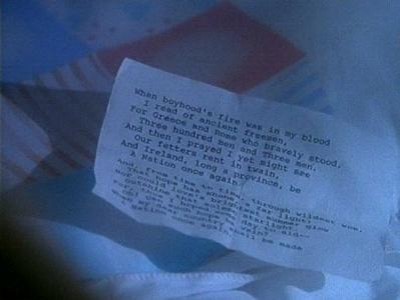