Carrie's boss, Pruzan, has his first big case as partner, and Carrie is overwhelmed with work. To complicate matters more, the case involves testimony from a delivery driver and Pruzan wants Doug to be the expert witness because he drives for IPS. Although Doug is really excited about working with Carrie, she isn't as thrilled with the idea. After Doug shows up to get prepped for the trial, Carrie is panicked that he is going to embarrass himself and her, so she tries to get Deacon to testify instead, which of course, hurts Doug's feelings. Pruzan is insistent that Doug be the witness, and after a lot of begging from Carrie, he agrees to come back and help her out. Over in Danny and Spence's apartment, a feud has ensued over Holly, the dog walker. Their strategy on getting the girl by spending the entire day with her backfires when she ends up giving her number to the gas man that comes over to fix their heater. 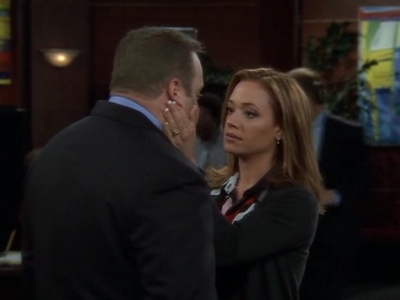